Lag Off – Winner was Mary Brown.  Lagged a 3 against 45 contestants 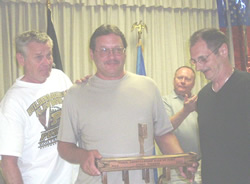 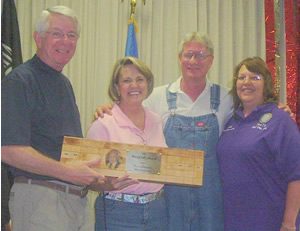 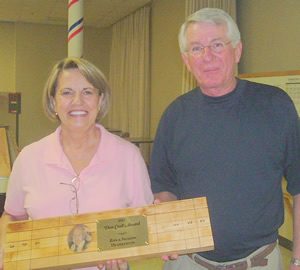 In spite of the torrential rains and the exorbitant gas prices, we had a good turnout at this year’s Southwest Open. The players began arriving on Friday as Round Robins began and by the end of the week we had over 175 registered players.

This year a new award was given to the player who accumulated the most points from participating in and winning round robins throughout the week. The 2007 Round Robin King of the Jungle was Ted Canada. Ted will receive free registration and free entry in the AB Draw and the Draft events in next years Southwest Open.

A huge thanks goes out to Johnny Wayne for his work on getting the boards ready. The boards played great and the players were very pleased.

We would also like to give a big thanks to all the American Legion Post 73 volunteers, Eileen, Jack and Andy and all the bartenders and cooks for taking care of us all week. And we would like to thank the tournament staff; Jack, Jim, Johnny and Kathy, for their time and effort in making the tournament a success. We want to thank Ann Harrell for taking the pictures for all the events and for allowing us to use her pictures for the TSA Newsletter which will come out next month.

We also want to thank Norm and Debbie Allinder for all their hard work to make this tournament possible. Norm was not feeling well during the tournament but continued to help out where he could. Our thoughts and prayers are with his family.

Bobby Voorhis of Indiana was inducted into the national hall of fame on July 5th, 2007. A group of screaming women greeted Bobby as he came to the stage. I think Bobby actually turned red!

The introduction was made by Jim Payne of Nebraska. Testimonials were given by the following people: Jim Long of Indiana, Bill Melton of Oklahoma, Bobby Williams of Texas, Glen Davidson, Dudley Hutcherson.

Larry Creakbaum told a story which may explain Bobby’s habit of not flying any where and then Larry and Jerry Siebert of Michigan, both TSA directors, presented Bobby with his trophy.

Bobby graciously accepted his award though he said he didn’t know how how he made it into the “old farts” club at his age!

The 1st Don Crall Award was presented to Ron & Sharon Huddleston for their work in promoting shuffleboard in OK, including the SW Open and Heartland Handicap tournaments.

Testimonials were given by Glen Davidson, Gerald Wood, Johnny Wayne Crawford and Kathy Yingst read an email from John McDermott.

Ron Huddleston spoke eloquently about Don Crall and how the SW Open went from 8 boards to 12 to 16 to 21 and so on.