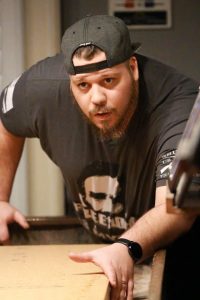 We had a very successful Inaugural Biggles City Championship.  Thank you everyone for coming out and playing your heart out!  Friday night started with the Qualifier with 13 players.
Congratulations to Ryan Reed, Jacey Pischel, Sheriff Hallberg, and Joe Charpentier for advancing into the Championship.  Saturday’s group play commenced for about 5 and half hours
with the top 2 players advancing to the sweet 16.

And our 1st Houston City Champ is Omar Cruz!

We’d like to extend special thanks to Debbie and Dave Sexton and anyone else who helped with the format of The San Antonio city champion.  We drew a lot of inspiration from their model even though we did things a little differently. Thank you for being so helpful and forthcoming.  Thank you to Obie Pierce as well for your input on group play and the format of the tournament.

We look forward to this little seed planted revolving around a Texas Wide Championship. We have some really outstanding players in all cities that should be showcased.